COLLWEB is a global network of collectors that builds a community of people who appreciate the value of art, cars, watches and real estate.

My art is about how I experience life

I was born in Sønderborg in Denmark close to the German border. My mother is Danish and my father was German, but studied construction in Denmark and became Danish. He started a company of architecture and construction in Fredericia back in the 7’ties, and I grew up working at his office: Saar’s drawing office. When I was a child, I was a competitor in swimming and trained hard every day. I was good and won a lot of medals. One day in 1981a while after after a competition in running I got a stroke, which left me in coma for ten days, and when I woke up, I found myself paralyzed in the entire left side of my body. My career as a swimmer was definitively over, but at least I recovered fast to an acceptable level, though I lost all my friends from the swim club. To replace the lost and to use same volumen of energy and satisfy my hunger for competition, I started drawing and writing besides exercising in a fitnesscenter to recover. Unfortunately I was hit by epilepsy because of the brain surgery, but I was lucky that it was pretty harmless in my youth, as long as I remembered taking my medicine.

As I grew older, I learned about architecture, and thought that I one day would be an architect as well. There were just one problem about that: I had no interest in houses, construction or buildings, nor was I very practical. I liked the drawings a lot, but I didn’t know, what to do with this weird interest for cartoons, it seemed pretty irrelevant being creating funny caricatures and writing about my feelings in my diary and later experimenting in lyrics, so to do something rational, I started study at the Seminary School in Tønder 1988. There I got an art teacher, who probably was the first person, who ever understood, what I was doing, and thus was able to support me in that direction, also the day in 1989, where I declared, that I wanted to drop my teachers studios to become a full time artist instead. He didn’t like the idea, but as he realized, that I was already decided, he chose to support me.

1990 I moved to Copenhagen, where I lived isolated in contemplation for two years before I met the girl, who became my wife. She was from Peru, and opened the door to the amazing Peruvian culture for me. We were married for 26 years and got two children. Any way I returned to the Seminary school in 1995 to continue and finished my studios as a Teacher in 1999. While finishing my studios epilepsy became a serious problem, which during the time have had serious consequences, most I form of anxious and suddenly escape.

After finishing my studios, which I had focused on existential aesthetics in both religion, art, pedagogic and adults pedagogic I worked for three years as a Highschool teacher in art and personally development. I studied theology as an independent student at the Aarhus university one year, before we went to Peru for one year trying to live there. We were married for 26 years, and though today we live separated Peru will always be a part of me and thus of my art. While staying in Pery I participated in lots of religious activities, which got an influential influence on my art, and until today is remarkable different with its transformational character. 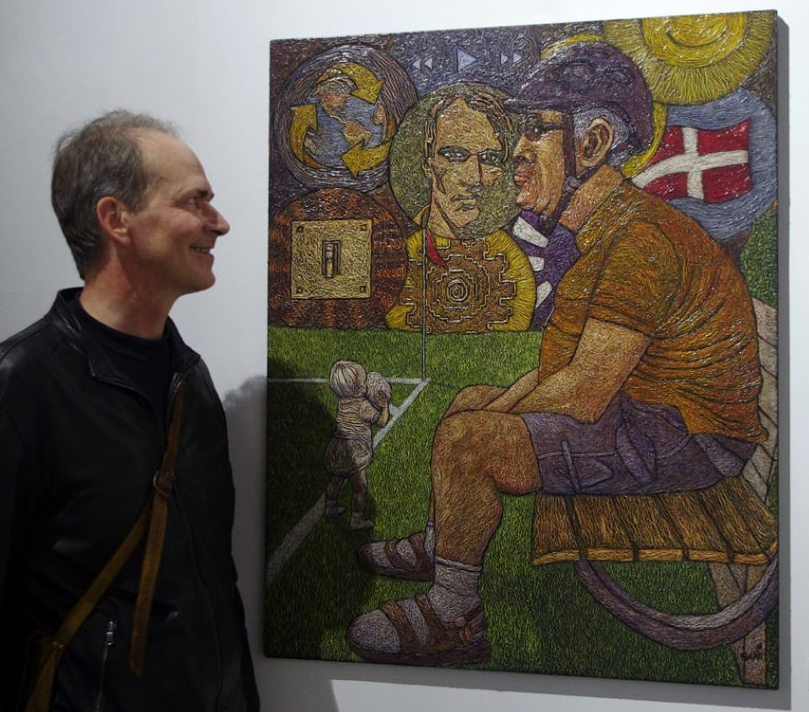 Times of ups and downs

Times of ups and downs

There is something about everything

Credentials
Exhibition, reading own poetry and concert at Amanj Zarafian at the bridge on the beach, Østerstrand in Fredericia
MEMBERSHIPS